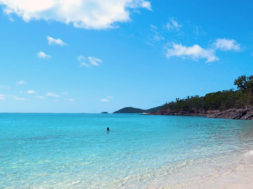 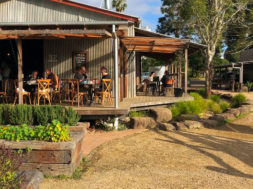 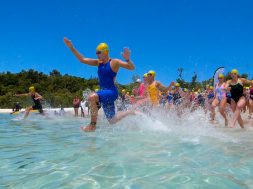 If there is one beach you would want to drop the pick at when visiting the Whitsundays it would have to be this one. Regularly voted one of the top 10 best beaches in the world, Whitehaven Beach!

What To Know About Whitehaven Beach?

Whitehaven Beach is spectacular 7 kilometres of the whitest sand you have ever seen and that’s because of its high silica content. High enough they say to polish your jewellery, but I can think of better things to be doing while I am on Whitehaven than chores. Whitehaven draws visitors daily from all over the world who use it in a number of ways and all of them should be found on a postcard.

What To Do At Whitehaven Beach?

And while plenty come to soak up the sun and just lounge around there are lots that come here to compete against themselves and other athletes in a gruelling swim event.
Nearby Hamilton Island runs the famous Whitehaven Beach Swim which sees athletes from all over come to compete in paradise.

I guess if you were going to swim two kilometres in open water I reckon this would be as good a place to do it as any. But if you own a boat especially a sailboat well I would imagine after watching this you are absolutely tonguing to get here.

The Beach is east of Hamilton Island in the Whitsunday Island group on the Great Barrier Reef in North Queensland. You can get there from Hamilton Island on most days. The Whitehaven Beach Swim is on again soon and you will find details on the Hamilton Island website. Don’t forget to check out Episode 58 of the Campr series to explore one of the top 10 beaches in the world.